The Grass Is Not Always Greener - It's Just Different Grass

So, a regular week's training consists of several swims throughout the week.  As a member of a nationwide gym chain, I had been going to a number of the chain's local gym facilities with indoor pools, but the problem I found at those locations was that if you were not out of the pool by 8:55am (although the AquaFit class started at 9am) you were given the major stink eye.

Man, those AquaFit participants are MEAN and crotchety.   The pool is big enough for us to swim in a far lap and not interrupt their jogging, but NOOOO... you had better get the f*** out or else!

So, I recently started going to swim at the pool of one of their newly acquired locations that merged into this chain from another large fitness chain.  It's very convenient and even closer to my house than the other locations.

It's a great outdoor pool - no chlorine fume toxicity - no need to worry about swimming within a dark windowless cavern and because you can't predict South Florida's weather, NO SCHEDULED AquaFit class.

Now, as with everything that happens in my life - there always has to be something to make it interesting.

1)  Is it really necessary to have include a statement within a sign on the wall that the pool shouldn't be used if you're "ill with diarrhea"?  Seriously people????  If you can't figure that out between the toilet and putting on your swim suit, there's a big problem. 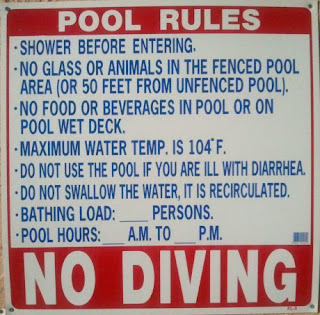 2)﻿ Beware of the "Buena Vista Social Club"-esque gathering that happens DAILY on the stairs of the pool.

Picture this, 7-10 men (50+) chillin' in the shallow end of the pool, some using the lane-marking ropes as their own personal "noodle" flotation device.  They've completely overtaken the main stairway in/out of the pool, which also includes about 1/5 of the actual lane - so you can't use that lane.

As to what they're discussing - you can liken this to what you see/hear at the walk-up window of Versailles (famous Cuban restaurant in the Little Havana neighborhood of Miami - all tried and true Republican politicos make this a mandatory stop on their campaigns through Miami) except, no cafecito, no cigars and they're all in swim trunks instead.  Their wives/families, the weather, Castro & Chavez (of course), more American politics, religion, etc.

Honestly, it's actually quite funny.

Now here's what's kind of creepy.  Sometimes, you'll get a straggler or someone who just decided to come early before the rest of the clan.  They sit and lurk.  This was the case on Tuesday morning.  I was in the far lane (where the stairs are) doing my muscle endurance swim workout (essentially a workout meant to fatigue your arms and shoulders and this guy (chewing a toothpick) was just chillin' at the end of my lane.

Seriously, what a pain.  But then again, what was I to do?  Go inside and tell the gym management that he was just chillin' in the swim lane?  May refer you back to the photo of the sign posted on the wall?  I don't think that it would have made a difference.

So, all in all, I just had to vent.  Not sure if this happens anywhere else.  But I guess I'll take the BVSC over the AquaFit Witches any day.  At least the BVSC guys don't mind if you're doing your thing while they're doing theirs.

I was feeling a little tickle in the back of my throat last night.  Emergen-C will be m new best friend for the rest of the weekend, especially since I have a race on Sunday.  I don't know if I'll be able to get in another post before then, but look for a post-race recap after the Mack Cycle Trilogy Race # 3 that I will be participating in.  Watch out for the "Crazy 8".
﻿ 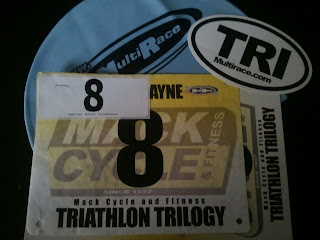 Want to get my blog via email?

Here Are Some Other Blogs and Pages I Recommend